The 17th Cable Wakeboard European Championships at Starwake Park in Ravenna ended up with a thrilling final in the Open Men Category. Riders from Germany, the Netherlands, Israel, Austria and Hungary made their way into the top 8. Austria’s Timo Kapl had an insane first run with a 900 over the kicker, followed by Mobe5, Raley5, toeside Blindjudge, backside 450 Transfer on the funbox, nosepress 180 to 180 out from the pipe, S-Mobe5 with grab, Switch KGB and a backside 720 from the last kicker. With that run he took over the lead till Guy Firer from Israel could improve his first score. Guy started his second run with a toeside backside 540 indy rewind, S-Bend backside 360, Crow Mobe, Raley5, Mobe5, toeside Blindjudge, and a 1080 at the inside kicker. In the end Guy Firer took gold 0,7 points ahead of Timo Kapl. Sam the Haan from the Netherlands completed the podium with his powerful run. 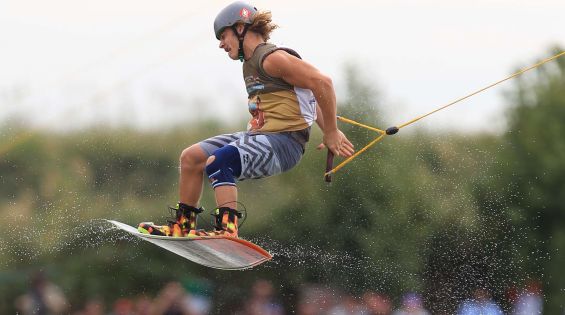 The Open Ladies category showed some impressive riding too, as the level exploded in between the past 2 years. Maxine Sapulette and Sanne Meijer, both from the Netherlands, showed crazy runs with Mobes, Double S-Bend, Tantrum to blind, S- Bend blind and 720 on the kicker. But it was the Julia Rick show that made it easy for the judges to crown a new European Champion in Open Ladies. Starting her run with a toeside backside 540, toeside raley 360, switch mobe, backside 450 transfer 90out, nosepress 360 off the pipe, raley backside 360, front to blind and a backside 720 off the last kicker.

The Wakeskate final in Open Men saw a though fight between the two German riders Marcel Tilwitz and Moritz Thiele. For the first time Marcel could beat his teammate in a big event; claiming gold with Frontside-Flip, backside Bigspin, and a huge ollie on the funbox. Moritz Thiele took second ahead of Artemiy Dunaev from Russia. In the Ladies final Zuzana Vrablova from Slovakia could win another golden medal. Ori Boujo from Israel took silver while Leona Grünzweil won bronze for Austria.